I had a dental implant placed six months ago. It has since had to be removed. The dentist said it was an easy removal because the bone never integrated. One of the things I am concerned about is he also perforated the sinus cavity. He said only by a few millimeters and that it happens all the time. Because there was no infection he told me there was no need for antibiotics, but I will admit I was concerned about that from the beginning. He put me on Flonase and told me not to blow my nose. Though he stitched up the gums, he did not do anything but clean the sinus perforation and said it would heal on its own. He thinks we can try again in a year. But, I have some serious concerns. I went back a week later for a follow up and I had pretty serious congestion and crackling. He said everything was great, but I felt differently and told him I wanted antibiotics. He gave in and prescribed some and I’ve felt better since then. Would I have needed these antibiotics if he had given them to me at the time of removal? 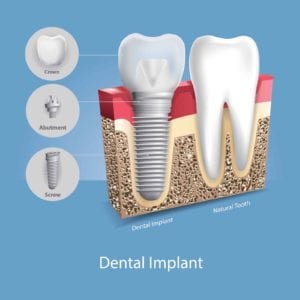 It was fine for him to wait for signs of infection before prescribing an antibiotic. These types of medications are not meant to be preventatives. However, there are bigger issues with your case such as the perforation of the sinus cavity and the failure of the dental implant. Let’s start with the perforation. While an oral surgeon will occasionally perforate a sinus, I would certainly not say it happens all the time. Plus, a few millimeters is a LOT by dental standards. Not only does a perforated sinus increase the risk of infection, but the amount in perforates is that much less bone than you will have to support your dental implant. Both of these hold the risk of dental implant failure. Second, why did the bone not integrate with the implant?

I would expect your dentist to have answers for why these happened before allowing him to do anything else with you. Additionally, because he perforated your sinus, there is bone loss there which will need to be replaced. In the area of a sinus cavity, this is called a sinus lift. You will also need some bone grafting done in the area where the implant was removed. Has he mentioned either of these to you?

In all honesty, I think you need a different dentist to do your dental implant procedure. I would look for someone who is a fellow with the Internation Congress of Oral Implantologists. These are the top implant dentists.

This blog is brought to you by Baton Rouge Dentist Dr. John Theriot.